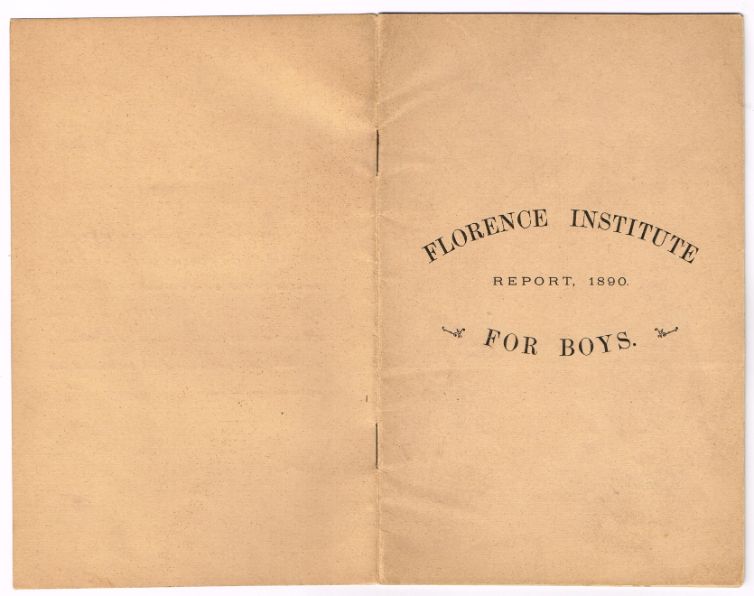 The Florence Institute first opened its doors on 7th September 1889. It was founded by Bernard Hall, former Mayor of Liverpool and West India merchant, in memory of his daughter Florence, who died in Paris in 1887, aged just 22. Hall did not live long enough to witness the opening of the Institute, as he himself died at Cannes, in the May of 1889. It is noted that his widow, Mrs Bernard Hall, attended a ceremony of 13th of September 1890 to unveil the medallion of their late daughter, which still stands on the main staircase.

The Committee of the Florence Institute presented the details of this report at the very first Annual Meeting on 23rd October 1890 at Liverpool Town Hall. They described the first year of operation as ‘experimental’, and thanked members of the Gordon Institute of Stanley Road for their assistance. Despite some uncertainty around how the Institute might operate, the founders shared a clear vision based on philanthropic Victorian ideals of morality, charity and self-improvement.  The Institute was created ‘in the hope that it might prove an acceptable place of recreation and instruction for the poor and working boys of this district of the city’. To meet this need, the Committee separated into three sub-divisions: Physical Recreation, Entertainment, and Education.

The Physical Recreation Committee launched a lively programme of cadet drills, a harrier’s running club, a swimming club and gymnastic pursuits. The gymnasium’s senior and junior teams won several competitions during this first year, defeating in turn the Gordon Institute, Hugh Oldham Club, Manchester, and the Chorlton and Medlock Boys’ Club. The boys were not permitted to revel in their successes however, ‘The Committee have tried to impress on the boys the importance of trying to excel in all competitions for the honour of being victorious not for the sake of winning prizes and medals.’

Entertainments were perhaps even more popular, with audiences quickly increasing from 200 to 1,000 per event, almost filling the Grand Hall to capacity. Entertainments for the 1889/90 audience included musical and dramatic performances at a cost of 1d. for members, and 2d. for ‘the people of the neighbourhood.’ The organisers were keen to provide good, wholesome entertainment that would raise-up the tastes of the community, ‘At the beginning of the season good music obtained only an indifferent hearing, but a taste for it seemed to be developed, and the last miscellaneous concert met with more genuine appreciation than any that had gone before.’ They were particularly keen to emphasise that the Institute’s Minstrel Troupe, the ‘Florence Minstrels’ and managed, without compromising their popularity, to avoid ‘the chief danger of such performances, viz., vulgarity.’

A bigger challenge for the fledgling Institute was the appeal of its educational programme. Classes including writing, drawing, reading, arithmetic, singing, string band, mechanical drawing, shorthand, history and bible class were piloted, but the report laments that classes were never full. Sometimes this was due to the cost of materials which members had to provide themselves, and there was a lack of volunteer teachers. Nevertheless, the Committee reported some encouraging successes, such as the Debating Club, which discussed topics as diverse as theatre, tobacco and the teetotalism: ‘the speakers were never very many, but the attendance was always good, and great interest was taken in the result of the voting. Considering the difficulty the Committee have had in preventing smoking in the Institute, it is somewhat surprising to find that our boys disapprove of tobacco.’ A library was open every evening for the boys to use, and the Committee reported with pride that while ‘first the only books applied for were those containing illustrations, and short simple stories; of late, however, there has been a steadily growing demand for books of a better class.’

Members of the Institute also enjoyed an excursion to the Walker Art Gallery, and on Easter Sunday the Superintendent took 370 boys to Raby Mere. 50 boys from the Institute spent the August Bank Holiday of 1890 at a camp near Hoylake. However, Sunday Services ‘of an unsectarian character’ failed to attract members and were abandoned in the summer months.

Despite the uncertainties of its first year, the Institute attracted a healthy interest from the boys of the surrounding neighbourhood. The average monthly attendance was 519, at a subscription of 4d. a month- that’s the equivalent to around £1.37 in today’s money!