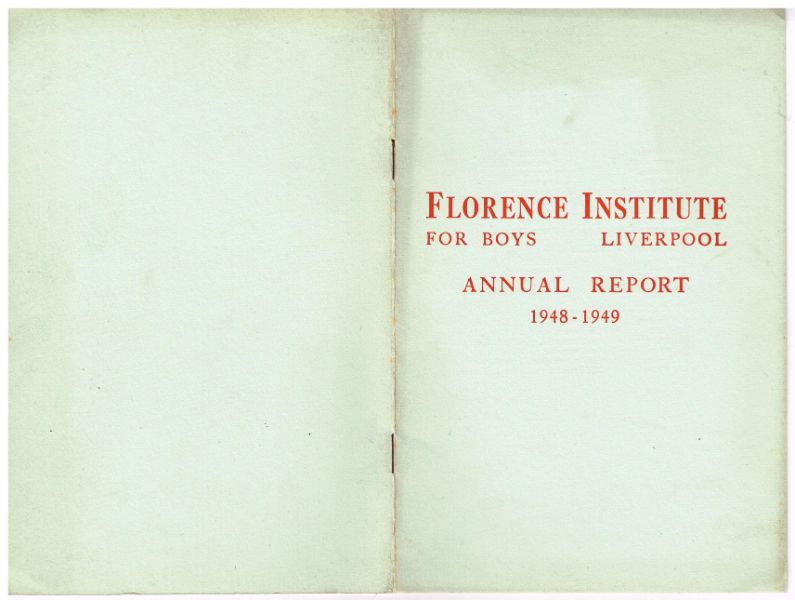 This year a complete overhaul and refurbishment of The Florence Institute was granted. This involved an entirely new electrical circuit being installed, the repointing of exterior walls, roof and windows repairs, and the redecorating of rooms, which included the extermination of dry rot in the library. This extensive work caused major disruption throughout the year. Of paramount concern was safety, and attempts to slash heavy annual maintenance costs, however, it was also recognised that aesthetic modernisation was perhaps just as important to the Institute’s survival,  “It was almost as important to alter the appearance of the Club from that of a mid-Victorian Institute to one in which the modern boy can feel he has a rightful place”. The importance of balancing the need to renovate with the preservation of the Club’s ‘old-spirit’ was duly noted.

Interestingly, in this report, the Institute was referred to as ‘The Florrie’. Its ethos was to accommodate anyone who wished to join, whilst maintaining high disciplinary standards amongst its members,“Without discipline there can be no order or progress. A balance must be struck therefore between order and disorder, discipline and the lack of it. Unless this balance can be found, some of our finest- though possibly our most difficult- boys may be lost to the Clubs which were originally founded for them”.

The Florrie welcomed substantial grants from The Ministry of Education, National Association of Boys Clubs, Liverpool Education Committee and Y.O.C., and gave special thanks to The Liverpool Boys Association, Liverpool Institute and Mr Lawrence King, whose generous gift of rope enabled The Florrie to build an excellent boxing ring.  Camping took on a whole new experience at Thurstaston with the magnificent work of the Warden, Old Boys and Members, who worked endlessly for five solid weeks laying pipes to give the camp water supply for the first time, enabled by the Y.O.C. grant.

Excellent links between the Management Committee and Wellington Road School were made when the Warden was elected as a School Governor. An allegiance was formed with the school’s headmaster, Mr. H. Parker, who held school gym classes and meals in The Florrie’s gymnasium.

Furthermore, a freely elected Boys Council of twelve members was instated. The Council demonstrated a good aptitude for Committee work, which upheld the tradition of self-government with the Club.

Women began to regularly visit The Florrie every Thursday evening for Ballroom Dancing. This was a mixed activity that that encouraged members to overcome the difficulties of dancing for the first time. The skills they acquired were put to good use every Saturday evening, when The Florrie opened its doors for the weekend entertainments.