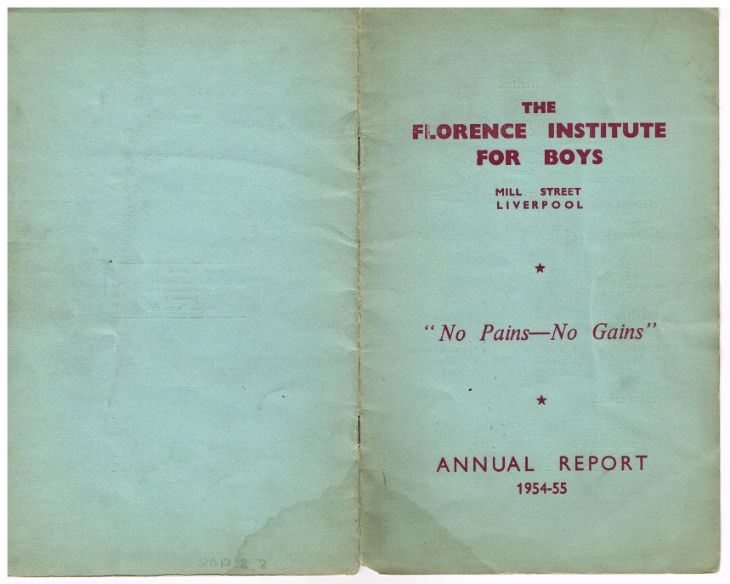 This year’s report began with a question:

‘Are you happy? If we put this question to our members at a general club assembly, we feel sure that the majority would answer YES. One of the reasons for this is that being a member of the ‘FLORRIE’ they have found a corner of life were (sic) they feel secure, a place to work and play, a living community of boys.

With this is mind we have this year made an effort to give our Boys’ Committee a real job to do and although they did not reach the dizzy heights of real self government, they did do a tremendous amount of hard work and with more training and guidance will prove our motto ‘No Pains No Gains’ is still very much alive and is not just something that appears each year on the cover of this report.’

The report described an intense interest in football as the ‘mainstay’ of the Club. The two Florence Albion teams, both of which finished top of their leagues, have been promoted to Division 1 of the I.Zingari League and Division 1 of the I. Zingari Combination.

The Florence Oxton Men’s Club was hampered by a new purchase however: ‘The acquisition of a television set has been much appreciated by the members though, with the exception of Basketball, it has unfortunately, though perhaps inevitably, tended to lessen their interest in other inside activities such as Billiards and Table Tennis.’

The Florrie continued to experiment with its programme of events and functions. It hosted an ‘Open Night’, ‘where a large number of Old Boys and Parents came along to hear Mr A. Townsend who was a warden in the 1920s.  This event was a real success and it was agreed that a similar function each year would be a very good thing. ‘