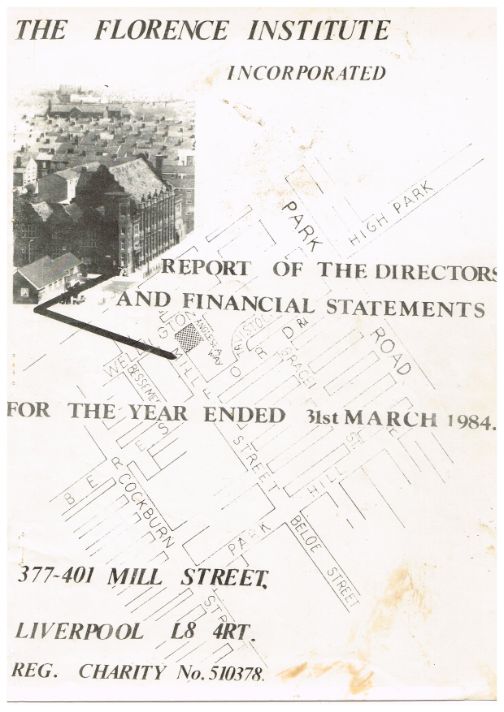 After three years of steady progress the Institute reported a difficult year, in the main due to the delay in appointing a new Youth Leader. The Institute had also been disappointed that they had not been able to make progress in developing a special initiative with the Education Authority to bring together the education sector with the Manpower Services Commission ‘and find more relevant ways of preparing and training young people for the work of the future so that the overwhelming problem of unemployment might be, in some small way more effectively tackled.’ It continues ‘..the plight of young people is a matter of major national importance we are most concerned that our efforts have been so frustrated by local and national government.’

Eventually, a new Youth Leader was appointed in the November to manage the 14-18’s, whilst younger members joined the Junior Club. The report clarified how the Florrie intended its work to be effective on an operational level, whist voicing grave concerns about forces outside its control: ‘It is viewed as the essence of our operation that the youth club and the youth workshops act as separate limbs of the same body and that the objective is to cater for the personal development and growth in knowledge of the over 16s. The need to work with the over 14s in their last years in school is increasingly recognised in terms of their vocational as well as academic orientation. This is reinforced by the 14 to 16 project initiated by the Department of Education and Science in certain areas. The role of the Youth Service in this connection is not yet fully appreciated. The challenge before us is that an opportunity exists within the Florence Institute due to the diversification of our work, to pioneer a development which could be a model for a combined school, training, further education and youth service operation. A major scheme embracing this approach initiated by certain H.M.I’s in the aftermath of the Toxteth riots was in process of development. The last change in City administration caused this project to be abandoned. It could yet be that a voluntary body has a role in indicating an important area of future work which the Public Authority must be persuaded to recognise.’

In addition, financial difficulties imposed considerable strains on the Institute, the cost of maintaining work on an ageing building were far beyond the resources readily available to the Institute.